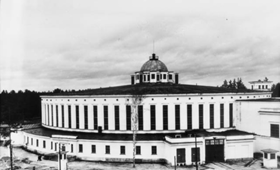 The Veksler and Baldin Laboratory of High Energy Physics – JINR VBLHEP – was established in Dubna in 1956 based on the Electrophysical Laboratory of the USSR Academy of Sciences. It was originally known as the Laboratory of High Energies (LHE). The founder of LHE and its first Director (1956-1966) was Vladimir Veksler, a talented scientist and organizer. He discovered the principle of autophasing, which underlies the operation of all modern high-energy cyclic accelerators. He led an ambitious project to construct the largest accelerator in the world at that time, the Synchrophasotron. In April 1957, the Synchrophasotron reached a record proton beam energy of 10 GeV. A decisive contribution to the construction of the accelerator was made by Leonid Zinoviev. He was in charge of the development of its model at the Lebedev Physics Institute in Moscow, and then, as head of the department, he supervised the construction and launch of the Synchrophasotron at JINR LHE. The launch of the Synchrophasotron caused a wide resonance in the world and was recognized as an outstanding achievement of science. The research programme at the Synchrophasotron was developed and performed under the leadership of V. Veksler, M. Markov and I. Chuvilo, who later became the second Director of LHE (1966-1968).

Together with the accelerator launch, an appropriate infrastructure was developed at LHE. It made it possible to design, construct and operate complex experimental facilities. This opened up an opportunity for an international team of scientists and engineers from JINR Member States to study the structure of matter, and conduct experiments in elementary particle physics at the forefront of science. Research fields are determined by the demands of theory and competitive methodological and technical capabilities of the laboratory. Alexander Baldin, Director of the Laboratory from 1968 to 1997, proposed a new direction of research in which the quark structure of nuclei reveals itself in the processes of nuclear interactions – relativistic nuclear physics, which currently forms the basis of the scientific programme of the Laboratory. It also includes studies of the quark-parton structure of nucleons and nuclei, the search for new states of hadron matter (quark-gluon plasma), the search for phase transitions in hadron matter, spin effects in nucleons and nuclei. In 1993, the first superconducting accelerator of nuclei, i.e. the Nuclotron, was put into operation at LHE under the scientific leadership of A. Baldin. A beam of protons with an energy of 10 GeV and nuclei with an energy of 4.5 GeV/nucleon was obtained and the implementation of physical research programme began. While constructing the Nuclotron, original solutions were found to a number of problems in the fields of accelerator technology and superconducting magnet technology. These solutions were recognized and developed in a number of the largest accelerator centers in the world. From 1997 to 2007, Prof. Alexander Malakhov was elected the Director of LHE. During this period, under his leadership, a system for slow extraction of accelerated beams and an internal target station were constructed at the Nuclotron accelerator complex. The nuclei were accelerated up to krypton, and beams of polarized deuterons were obtained.

In January 2002, at the 91st session of the JINR Scientific Council, the Laboratory of High Energies was named after V.I. Veksler and A.M. Baldin. The organizational structure of the Laboratory has changed over the years in accordance with the requirements of developing science and the decisions of the Committee of Plenipotentiary Representatives of the Governments of the JINR Member States. In 1988, on the basis of the Department of New Methods of Accelerations and a number of scientific groups of LHE and LNP, the Laboratory of Particle Physics (the Laboratory of Superhigh Energies until 1997) was established. The goal was to unite experimental physicists and specialists in accelerator physics actively involved in particle physics experiments conducted in the largest accelerator centers of the world and in the development and construction of new accelerators. Prof. Igor Savin was elected the first Director of LPP. Under his leadership, the Laboratory staff actively participated in the most relevant research programmes studying the structure of the nucleon, spin physics, kaon and neutrino physics. Since 2006, all these divisions of JINR have been united in VBLHEP.

In 1997, Prof. Vladimir Kekelidze became the Director of LPP. In 2007, he was elected for the position of LHE Director. Since then he has been leading preparatory work for research on the study of the properties of strongly interacting matter in extreme conditions. An initiative group of JINR theorists, headed by the Institute’s Director Academician A. Sissakyan, had proposed the programme of such studies. To implement it on the basis of the Nuclotron, LHE started constructing an accelerator complex of superconducting rings for colliding beams of heavy ions – NICA, experimental facilities MPD (Multi-Purpose Detector) and SPD (Spin Physics Detector), as well as the BM@N facility at the extracted beams to study the properties of baryonic matter at the Nuclotron. The construction of the NICA complex is being completed. The implementation of the physics programme begins in 2023.

The massive amount of primary information obtained at the Laboratory facilities has developed the basis for the formation of large international collaborations for data analysis at JINR and many institutes in the Member States. The number of physicists working outside VBLHEP has become many times greater than the number of full-time employees of the Laboratory. This process of internationalization of science continues to expand. Currently, the Laboratory of High Energy Physics is a research center for conducting a wide range of relevant work in the field of the physics of elementary particles and atomic nuclei. The Laboratory has an extensive international scientific cooperation with CERN, physics centers of Russia, JINR Member States, the USA, Germany, Japan and other countries. International cooperation includes joint construction of equipment, data processing, physics analysis and interpretation of results. The Laboratory staff took an active part in experiments at the proton synchrotron U-70 at the Institute of High Energy Physics in Protvino, the Super Proton Synchrotron (SPS) at CERN, the Fermilab Tevatron, the HERA collider at DESY, and made a significant contribution to obtaining physics results in the study of the properties and interactions of elementary particles and the quark structure of nucleons and nuclei. Nowadays, the VBLHEP staff continue research at the Nuclotron, make a significant contribution to research at CERN SPS, the RHIC collider in the USA and the Large Hadron Collider at CERN. The Laboratory has successfully fulfilled its obligations to develop and construct separate sub-systems of the ATLAS, CMS, ALICE detectors at the LHC and the LHC collider itself. This work has been highly appreciated by the CERN management and the world scientific community.

The VBLHEP activity envisages the unity of fundamental research, innovation and educational programmes. The scientists of the Laboratory hold classes at SINP MSU and the Dubna State University. Schools and conferences for young specialists are regularly held. A group of experts in the field of information and communications technologies has created a multimedia presentation website, where the activities of VBLHEP and JINR are presented in a visual and fascinating form of open lessons. The topics of these lessons are the problems and state of nuclear physics, VBLHEP projects and its facilities, accelerator technologies, including “NICA ‒ The Universe in the laboratory”, and others. Laboratory specialists participate in the creation of an interactive exhibition, and in the arrangement of a display at the JINR Museum of History of Science and Technology. To support successful young specialists, the Laboratory Directorate has established three grants named after Academician V.I. Veksler, Academician A.M. Baldin and Academician M.A. Markov.

The history of VBLHEP is rich in outstanding events and world-class discoveries. It is inextricably linked with the history of life and the fate of a whole generation of scientists, engineers and workers. Their professionalism, enthusiasm and commitment are the key to the further thriving of the Laboratory.

About V.I. Veksler
About A.M. Baldin